Accelerating Growth and Returns at Amgen

Amgen Inc. founded in 1980 and headquartered in California, USA is a global biotechnology pioneer that discovers, develops, manufactures and delivers human therapeutics. The company mainly focuses in the areas of cancer, kidney disease, rheumatoid arthritis and other serious illnesses.

The Company has been reporting positive revenue growth from the last five years driven by a high quality product pipeline and strong execution across the portfolio. Amgen’s revenue for fiscal year 2013 increased by 8% from the prior year to $18,676 million and by more than 27% from the fiscal year 2009.

Amgen started paying dividends in August 2011 and for the fiscal year 2013 the management increased its dividend by an impressive 30%. With share repurchases of $0.8 billion and $1.4 billion in dividends Amgen has handsomely rewarded its shareholders in fiscal year 2013.

Amgen’s long term debt of $30.8 billion as of June 2014 represents a reduction of $1 billion or 4% from the year end. Amgen boasts of an effective working capital management as reflected in its current ratio of 3.44 for the fiscal year 2013 indicating ample liquidity to meet any unforeseen financial needs. Share buybacks in the recent years have ensured higher return on equity as ROE increased by 3.6% points to 23% in fiscal year 2013 from the year 2011.

Amgen is on path to profitability supported by its strong product pipeline which is realized through increased revenues, operating profit margins and net income. The cost saving initiatives which will bring in operational efficiency will enable Amgen to focus on growth areas while continuing to deliver significant value to shareholders. 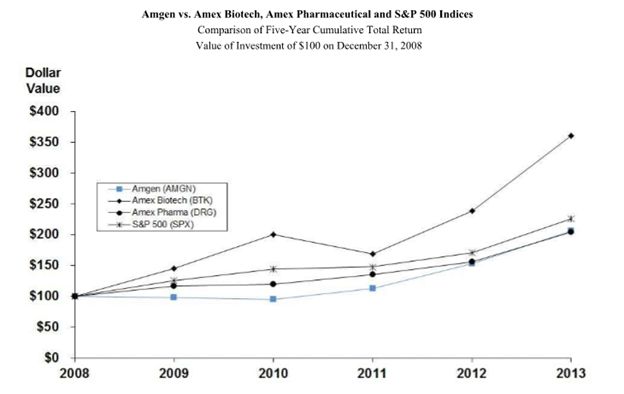