Coca-Cola has a rich history of dividend increases and has kept up with the tradition by increasing its dividend for the 52nd consecutive year in 2013 as it returned $8.5 billion in value to shareowners through dividends and net share repurchases. Cash dividend of $1.12 for 2013 represents an increase of 10% from the prior year and a dividend yield of 2.8%.

Earnings and revenues continue to go down

”Unit case volume”, a key metric to measure consumer demand and company’s performance increased 2% worldwide in the fiscal year 2013 compared to 4% growth witnessed in 2012. Company’s revenues have therefore remained flat in the last two years after showing a significant increase in 2011 which was primarily due to structural changes related to acquisitions. For the fiscal year 2013 revenues declined by 2% to $46,854 million compared to 3% improvement in 2012. Gross Profit margin for fiscal year 2013 was 60.7% and has remained constant and unvarying in the past three after posting a high gross margin of 64% in 2010.

Passive revenue growth in the past two years caused by shifting consumer preferences towards health drinks affected company’s operating margins as both EBIT margin and net operating margin declined. The bottom line was severely impacted as Net Income ($8.6 billion – fiscal year 2013) decreased by 5% from the previous year and by 27% from the last three years. The Earnings per share which for the most part fluctuated in the past three years, declined in 2013 by 24% to $1.94 from 2010.

Coca cola’s revenue growth has been very sluggish with its operating margins and net income declining. It has however rose to the challenge by increasing investments in the energy drink market and diversifying its beverage portfolio to adapt to changing consumer’s tastes. The Company’s ability to maintain consistent gross margins shows that Coca-Cola can adapt to changing trends while at the same time paying ever increasing dividends. 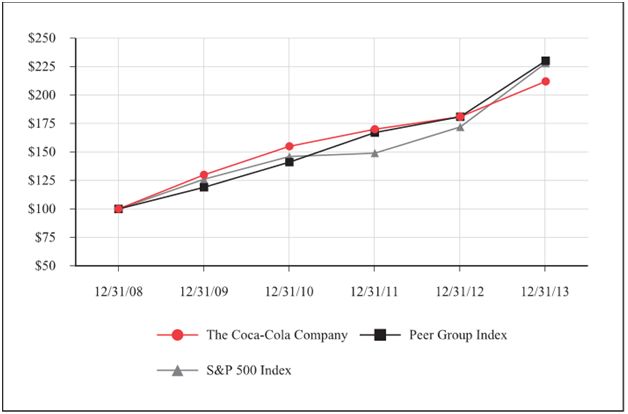