Campbell’s revenues for Fiscal Year 2013 came in at $8.05 billion, an increase of 12% from the prior year. This significant growth rate is attributable to acquisition of Bolthouse Farms and Plum which contributed 11 percent out of the total 12 percent growth. This achievement is noteworthy since the company has been posting a dull average growth rate of 0.8% in the last three years.

Campbell’s gross margin at 36.2% in Fiscal Year 2013 was a 3 percentage point decrease from the prior year. The factors that impacted the gross margin were the acquisition of Bolthouse Farms and restructuring-related costs. EBIT also declined by 6.5% for the Fiscal year 2013 and came in at $1.08 billion compared to $1.15 billion in the prior year.

The increase in revenue was offset by decrease in gross margins and led to lower net Income. For the Fiscal year 2013 Net Income stood at $458 million, a steep decline of 40% from the prior year. Campbell’s EPS of $1.46 also experienced a downturn owing to lower net income and fell by 40% compared to prior year.

Company’s long term debt at the end of April 2014 stood at $2.247 billion, a 24% reduction from the debt as recorded on April 2013. Additionally, for the recently ended third quarter ended April 2014, Campbell had a current ratio of only 0.69 which reflects a poor short term financial health. Further analysis reveals a quick ratio of 0.47 which spells further trouble for the company.

Campbell has been paying dividends since the company became public in 1954. The dividend per share for the fiscal year remained constant as from previous year at $1.16 per share and has an annual yield of 2.82%

Positive aspects with concerns for company

Campbell has experienced decline in gross margins that has impacted its net earnings and is a sign of concern. However, the acquisitions in recent years have paid off as they added to the revenues in the fiscal year 2013. Also, Campbell’s secure dividend policy will benefit the conservative shareholders.

The following graph compares the movement of Campbell’s stock price against S&P 500 and S&P Packaged Food Groups and also gives a summary of company’s performance in recent years. 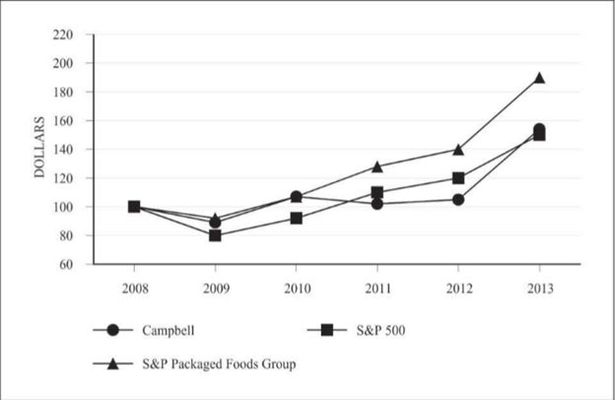