For the past book year, according to the analyst's expectations the revenue will be around 59,5 billion euros. This is slightly less then the 2014's revenue of 59,79 billion euros. For 2015 most of the analysts expect a net loss of 836 million euros.

For this year the analysts expect a loss per share of 58 cents. So based on these estimates the price/earnings-ratio equals -5,38.

Despite the expected loss the analysts expect that the company will pay out dividends. Per share the analysts expact a dividend of 20 cents. The dividend yield equals 6,41 percent. On average the stocks in this sector yield a dividend return of around 1,21 percent.

The matrix above shows ArcelorMittal's historical returns expressed in the different entry years in the left axis.

The graph above shows the developments of ArcelorMittal's stock price (blue) and revenue (red) for the period 2008 till 2015 (the analyst's expectations. It seems that the industrial company's revenue hardly is connected with the stock price: the correlation equals 0,13. 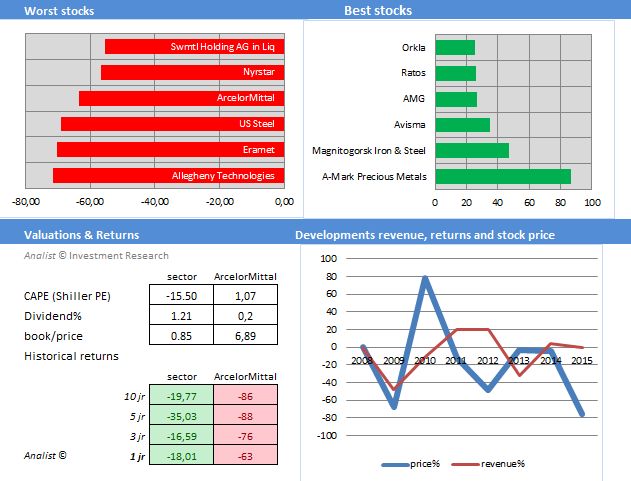 The stock ArcelorMittal is covered by 24 analysts. The average target price for ArcelorMittal is at 6,45 euros. This is 111,27 percent more then the current stock price of 3,12 euros. Within the sector industrial metals sector the analystst mostly prefer AMG, Aperam and Aurubis.