Over this year the majority of the analysts, asked by press agency Thomson Reuters, expect a profit per share of 20 cents. So based on these estimates the price/earnings-ratio equals 518,25.

The analysts don’t expect the company to pay any dividends. The average dividend return of the sector is 0,08 percent.

The matrix above shows NetFlix's historical returns expressed in the different entry years in the left axis.

The graph above shows the developments of NetFlix's stock price (blue) and revenue (red) for the period 2008 till 2015 (the analyst's expectations. It seems that the internet company's revenue hardly is connected with the stock price: the correlation equals 0,14. 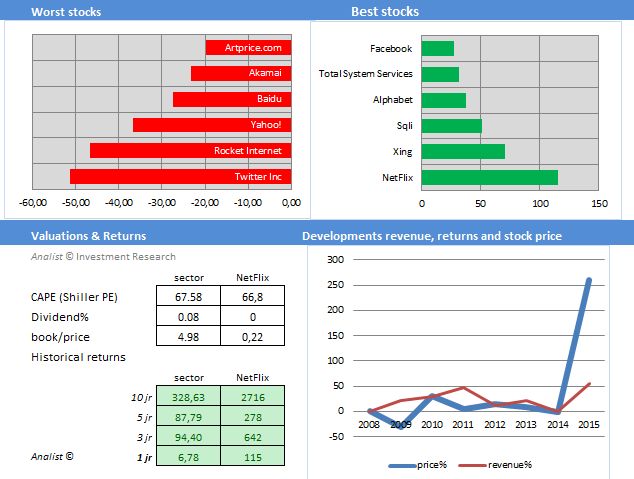 The NetFlix stock is covered by 16 analysts. The average target price for NetFlix is at 96,19 dollars. This is 7,2 percent lower then the current stock price of 103,65 dollars. The stocks Akamai, Facebook and Scout24 in the sector internet sector have the most buy recommendations.

The last 3 recommendations for the internet sector are given by Dolmen (buy, without target price), Cowen and Company (buy, 154,00 dollars) and Nomura Securities (buy, 125,00 dollars).