The Airbus Group is a European multinational aerospace and Defense Corporation registered in the Netherlands and a defense and military contractor worldwide. The group consists of the three business divisions Airbus, Airbus Defense and Space, and Airbus Helicopters.

Airbus’s latest annual reports show that Airbus’s revenues for 2013 reached €59,256 million, an increase of 5% from the prior year driven by increased aircraft deliveries and operational improvement. Further analysis reveal that in the past four years the company’s turnover rose by a whopping 30%. The company’s gross margin increased by €463 million to €8,361 million in the fiscal year 2013 from the prior year.

Airbus delivered a stellar second quarter results and advanced with all the key financial variables displaying progressive growth. For the second quarter ended June 30, 2014, Airbus’s revenues amounted to €14,552 million an increase of 7% on a Y-o-Y basis for the same time period from the prior year and a 15% sequential growth from the previous quarter. The Net Income also increased by 33% to €705 million in the second quarter of 2013 compared with the same period from the prior year which confirms the continued momentum in commercial aircraft business.

For the fiscal year 2013 Airbus’s EBIT rose by a spectacular 24% to €2,607 billion from the prior year which signifies the company’s underlying profitability. This increase seen in operating profit elevated the operating margin by 0.7% points to 4.5% for the fiscal year 2013. The improved financial performance in EBIT prompted Airbus to hike its dividend by 25% to €0.75 per share in 2013. The Company plans to target sustainable growth in the dividend within a payout ratio of 30%-40%.

Airbus is delivering on securing profitable growth by focusing on successful operation execution which has lent traction to its strengthening financial position in the last three years as seen in increased turnover, operating profit and most importantly its EPS. The one distressing factor in the company’s analysis has been the increase in long term debt and decrease in its cash position which impacts the capital structure and there by its financial flexibility.

The following graph compares the movement of Airbus’s stock price against CAC, a benchmark French stock market index and MSCI index that measures the performance of the aerospace and defense sector of the U.S. equity market. It also provides a summary of company’s performance in recent three years, which illustrates how company has outclassed CAC and MSCI in terms of capital appreciation with the sharp increase in share price. 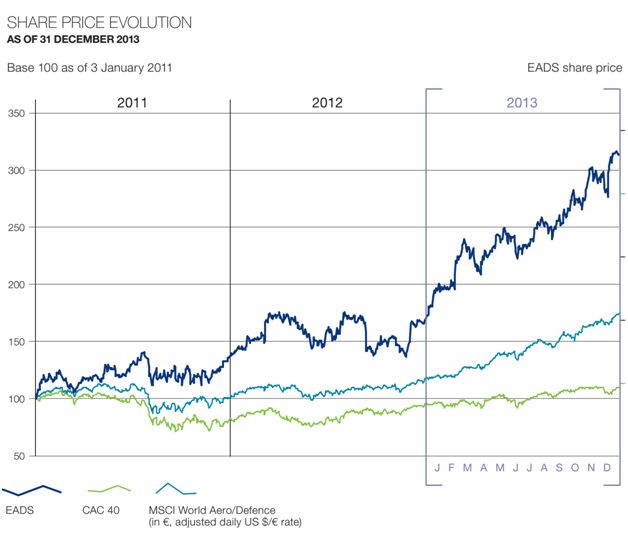