Over this year the majority of the analysts, asked by press agency Thomson Reuters, expect a profit per share of 3,16 euros. So based on these estimates the price/earnings-ratio equals 23,29.

The matrix above shows ASML's historical returns expressed in the different entry years in the left axis.

The graph above shows the developments of ASML's stock price (blue) and revenue (red) for the period 2008 till 2015 (the analyst's expectations. It seems that the semiconductor company's revenue huge is connected with the stock price: the correlation equals 0,84. 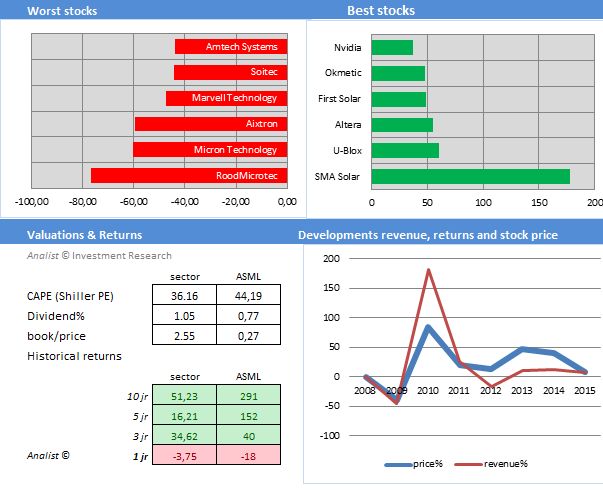 ASML's book value versus per stock price equals 0,27. The semiconductor company now trades with a CAPE (Shiller PE) of 36.16. The stock now trades at 73,59 euros. This equals 23 times the 2014's earnings per share.

The stock ASML is covered by 28 analysts. The average target price for ASML is at 94,00 euros. This is 29,71 percent more than the current stock price of 73,59 euros. Within the sector semiconductor sector the analystst mostly prefer First Solar, ASM Int. and Applied Materials.

The 3 most recent recommendations for the semiconductor sector were provided by ING (hold, 85,00 euros), Liberum (sell, 64,00 euros) and Independent Research (sell, 65,00 euros).