Imperial Tobacco Group PLC (Imperial or 'the group') is engaged in the manufacturing, marketing, distribution and sale of a wide range of cigarettes, cigars, rolling papers and filter tubes. The group also provides logistics and distribution services for tobacco and other products. Imperial primarily operates across the European Union (EU) region.

Company’s results for the year 2013 show that the revenue declined by 1% to £28,269 million from the prior year. This decline is nevertheless an achievement considering the deteriorating industry volumes in the EU as a result of austerity measures, unemployment and illicit trade. Despite this minute decline operating profit in year 2013 climbed 29% to £1,958 million. The five year cost optimization program launched in early 2013 aimed at driving down product cost and complexity reductions to achieve savings of 300 million by the year 2018 contributed to this impressive performance in operating profit. The Net income for 2013 came in at £961 million, an astounding increase of 37.5% from the prior year. Also, EPS of £0.96 for the year 2013 was a significant improvement from £0.68 for the prior year.

Latest half yearly results however diverge from the annual performance as revenues decline by 5% to £12,717 million for the six months ended March 31, 2014 when compared to prior year for the same period. Stock optimization program which was targeted at reducing trade inventories in some markets adversely impacted this revenue figure. Added to that, Non-cash amortisation charges further reduced operating profit and EPS. Operating profit was down 17% to £999 million and net profit was down 40% for the six months ended March 31, 2014 from the prior year for the same period.

Dividends: a priority for the management

Dividends increased by 10% to 116.4 pence in the year 2013 in line with management’s commitment to grow dividends by at least 10 % per year over the medium term. Imperial Tobacco has doubled its annual cash returns since 2010 to the shareholders to £1.6 billion by growing dividends combined with share buybacks. Starting 2015, the company plans to initiate quarterly dividend payments.

The market estimates revenue and net income to expand at a slower pace which is in concurrence with recent results and also with the declining industry volumes. However, the market forecasts EPS and dividends to grow in the coming periods at an accelerated rate as Imperial Tobacco reinforces its policy to increase its dividends in medium term and its share buybacks. The market consensus is outlined in the below table.

Imperial Tobacco Group PLC will present at the Barclays Back to School Conference on September 3, 2014.

Following are 3 major shareholders of company:

Imperial Tobacco’s performance over the last five years has been broadly aligned with FTSE 100 index but ended 11% points down for the fiscal year 2013. 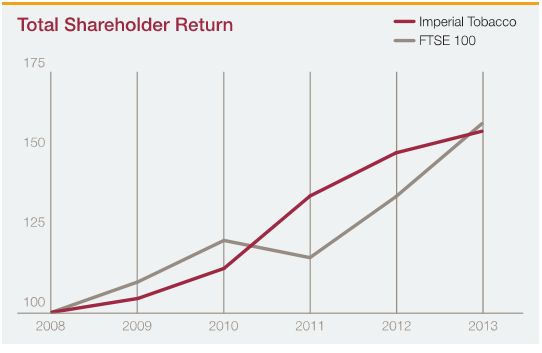