Ford Motor Company (Ford) is a producer of automobiles and together with its subsidiaries is engaged in other businesses, including financing vehicles. The Company operates in two segments: Automotive and Financial Services. Automotive includes Ford North America, Ford South America, Ford Europe, and Ford Asia Pacific Africa region. Financial services include Ford Motor Credit Company and Other Financial Service. Its automotive brands include Ford and Lincoln.

Ford’s wholesale unit volumes increased remarkably by 12 percent in Fiscal Year 2013 compared with 2012, as customers took delivery of more than 6 million new Ford and Lincoln vehicles. Consequently, Ford’s total sales for the fiscal year 2013 increased by a 10% to $146 billion compared to the prior year. The company’s pretax profit declined by 9% to $7 billion in fiscal year 2013. However excluding the impact of special items, pretax profit rose impressively to $8.6 billion, a rise of more than $600 million helped by higher automotive sector results

Ford’s EPS in fiscal year 2013 also gained traction as it added 34 cents from the prior year and came in at $1.82. Armed with such magnificent results and building on the strong foundation, Ford aims to expand further in 2014 by launching the most vehicles worldwide in a single year in their history. As a result of record number of new product launches, Ford expects North American pre-tax profit to be lower in 2014 than in 2013. However the payoff will be higher volume and revenue opportunities into 2015 and beyond.

Ford’s recently ended quarter showed a decline of 1% from the prior quarter in both wholesale volume and total revenue. Despite this decline, the company’s pre-tax profit increased by 16% which demonstrates greater operating efficiency.

Led by record profits in North America and Asia Pacific Africa, Ford achieved its fifth year in a row of positive net income. Net Income in latest annual results rose remarkably by 26% to $7.15 billion from the prior year. This strong performance enabled Ford to double their quarterly dividend in 2013 and subsequently raise it by 25 percent in the first quarter of 2014. The company paid 12.5 cents a share in the first quarter of 2014.

As of June 30 2014, Ford’s long term debt stood at $118.7 billion an increase of 3.5% from Dec 2013. However company’s gross cash position increased by $1 billion from latest year end to $25.8 billion at the end of second quarter which reflects strongly on its liquidity position.

Ford is on the path to profitability as it increases revenue and net income by new product launches, geographical extension, greater expansion plans which is well complimented by smarter efficiency strategies and growing operating margins.

FORD MOTORS ON THE LEAD AGAINST S&P500 WITH STRONG PERFORMANCES OVER THE YEARS. 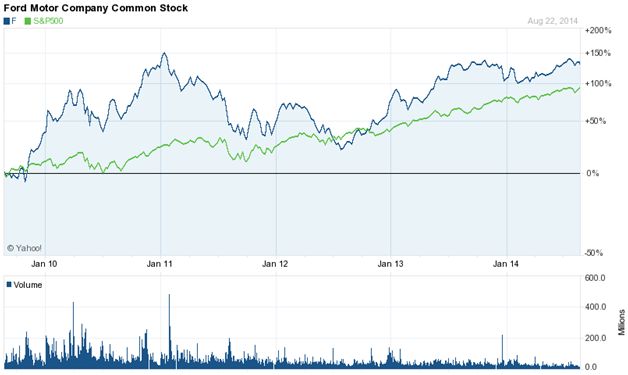