A Leaner Nokia on the path of profitability

Nokia Corporation invests in technological devices. The Company is focused on three businesses: network infrastructure software, hardware and services, which it offers through Networks; location intelligence, which is provided through HERE, and advanced technology development and licensing, which the Company pursues through Technologies.

Nokia’s revenues for the fiscal year 2013 declined by 17% to €12.7 billion when compared to its last fiscal year. This decline was primarily due to lower Network and HERE earnings, two of the three business that Nokia operates in. Despite the slide in earnings Nokia’s Gross margins increased by 6% points in 2013 from the prior year. The divestment of less profitable business which was well complemented with great product mix helped contribute to this increase.

Nokia ended Q2 2014 with a strong balance sheet and solid cash position with gross cash of EUR 9.0 billion compared to EUR 6.9 billion respectively, at the end of Q1 2014. This increase in liquid assets was primarily due to proceeds from the sale of substantially all of the Devices & Services business to Microsoft. Also the company started a capital structure optimization program and reduced the €950 million of debt related to Nokia networks. As reported on June 30, 2014, Nokia Group’s long term debt stood at €2.4 billion, a decrease of 26% from January, 2014.

Nokia after suffering consecutive fall in revenues, is recovering as it divests itself of handset segment and focusses on networking business. The company’s increasing margins along with growing revenues is a step in positive direction for the company. Furthermore, reduction in long term debt is clearly an improvement to its capital structure. Additionally, the recommencement of dividends is a positive sign for the shareholders. 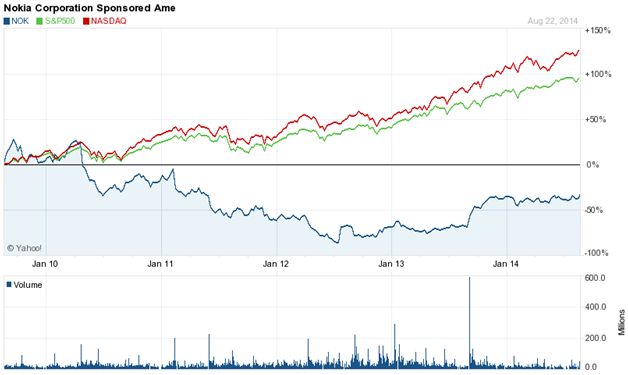