Evotec AG is a Germany-based parent company of the Evotec group, which is engaged in drug discovery and development company focused on providing integrated drug discovery services and alliances to the pharmaceutical and biotechnology industry. Additionally, the Company has a small number of its own drug candidates at various stages of development either partnered or available for partnering.

Evotec’s revenue slightly slumped in the fiscal year 2013 after having posted high revenue growth in the prior years. The revenue for FY 2013 came in at €85.94 million, a slight decline of 1.5% from the prior year. This decline in revenues is attributable to results of pre-clinical studies that delayed the completion of milestones. However, for the second quarter ended June 30, 2014 the company’s revenue rose 15% to €22.47 million, when compared to the same period in the prior year.

Evotec’s gross margin witnessed an increase of 0.8% points in the fiscal year 2013 and almost remained consistent with prior year.

EBIT margin has been declining in the past two years and further deteriorated in Fiscal year 2013 where it stood at -24.8%. Net Income for the fiscal Year 2013 was -€25.43 million, an exceptional amount of decline from the previous year when the net income was positive at €2.47 million. The biggest factor that contributed to the decline was the impairment of intangible assets that amounted to €22 million in the fiscal year 2013. This fall in Net Income impacted the EPS which fell drastically to -€0.21 in Fiscal Year 2013 from €0.02 in the previous year. Further, the company posted loss of -€4,428 million for the latest half year results which was consistent with the results for the same period prior year (2012:- €4,583 million).

Evotec’s current ratio of 3.15 in FY 2013 was an improvement from the prior year when it stood at 2.60. This indicates Evotec is better prepared to meet any short term obligations. As at 31 December 2013, Evotec remained well-financed with an equity ratio of 69.9% compared to previous year of 67.7%. However the latest FY 2014 results for the half year ended June 2014 indicates that the company increased its long term obligations to €3.4 million.

Evotec has been following a policy of not paying any dividends since last five years. It intends to retain any potential future profits and reinvest them in the Company.

To summarize, financial position of Evotec has gradually declined in the past two years. The fluctuation in revenues coupled with increased downward pressure on the operating margins has negatively impacted the net income. On a positive side, the liquidity position which is a critical aspect of the company’s functioning increased which makes it well positioned to meet any unforeseen capital requirements.

Huge flucutation in the company stocks in past 5 years, realtively volatile stock 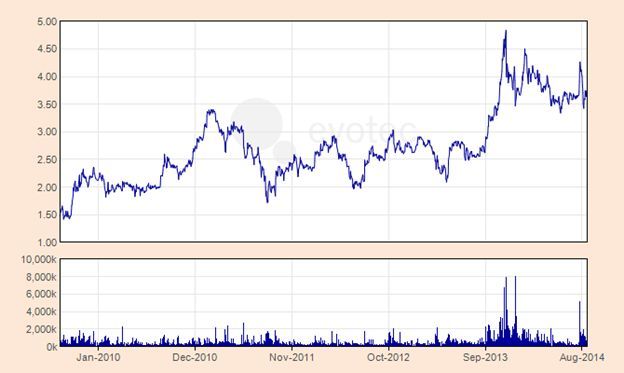