Coinbase to Add Dogecoin to its Portfolio Within 2 Months

May 17, 2021
Following the 1st quarter earnings call as per May 13th, Coinbase CEO Brian Armstrong announced that his company, which is one of the biggest cryptocurrency exchanges in the world, if not the biggest, will add Dogecoin to its list of tradable assets; this decision follows Dogecoin and Coinbase’ spectacular growth in 2021.

Coinbase just went public last April, and its stellar IPO helped the company boost its user base from 34 million a year ago to 56 million, and the same story goes for Dogecoin. To give you an example, you could buy Dogecoin with $0.0047 per coin back in December 2020. Currently, Dogecoin is listed at $0.54, after hitting $0,73 earlier this month (May). The funny thing about Dogecoin is that it was created as a joke initially, i.e. it has a parody-driven origin, yet in the current climate, it’s the 4th largest cryptocurrency by market cap (almost 40 billion USD).

Sadly, it is impossible at the moment to buy Dogecoin on Coinbase, as the latter failed so far to make room on its platform for the former, despite its cult-like following and recent performance.

Unfortunately for Dogecoin users looking to tinker with their favorite cryptocurrency, it is relatively difficult to acquire Dogecoin directly from Coinbase, i.e. you’ll have to buy BTC from Coinbase first, then transfer BTC to another platform/crypto-exchange like Binance, and once the BTC is transferred to another exchange, you can trade it for Dogecoin. This sounds like a major headache, and it is, but things are going to change soon.

Even if a significant number of “newbie” crypto investors are trying to avoid the hassle of buying Dogecoin, despite Coinbase’ user-friendly interface, this may translate into lost opportunities in terms of profits, as altcoin prices are always fluctuating. 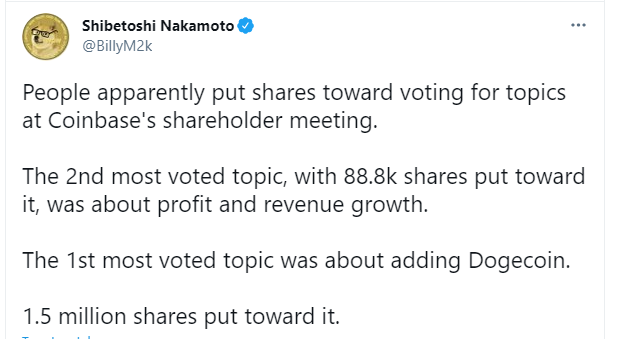 Coinbase’ “fan-base” is asking the crypto exchange to offer them a simple solution to buy their beloved Dogecoin, hence the company will have to do something about that soon. And what do you know: Coinbase just announced that it’s adding Dogecoin to its roll of tradable cryptocurrencies, on top of the first earnings call as a publicly-traded company. 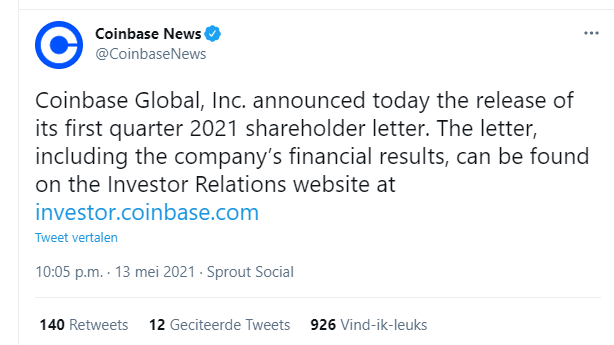 The IPO fell kind of flat on Wall Street, as Coinbase managed to draw $1.80 billion in revenue, as opposed to the expected first-quarter revenue haul of $1.81 billion. The same goes for the $3.05 EPS., as investors expected an EPS of $3.09. So, even if Coinbase fell short of expectations by a small margin, it’s worth mentioning that when the company went public back in April, its listed share price was $381. Since then, the company did not do so well, as COIN traded below that, and opened at $264.91 on May 14th.

Coinbase stock creates a money-making opportunity for investors who are risk-averse to crypto currencies’ volatile pricing, i.e. it allows them to get into the crypto space without having to deal with alt-coins volatile pricing themselves. It’s well known that Dogecoin has a hard-core fan base of ardent enthusiasts/investors, which is pretty similar to what happened with the GameStop extravaganza via Reddit users.

As far Coinbase is concerned, adding the 4th largest cryptocurrency into its “portfolio” is good news in terms of increasing training activity and adding new users, even if it’s relatively hard to predict the impact of the announcement on Dogecoin’s price.