Watch out for iron ore

Since the start of 2016, metal prices have rebounded, driven by the uptick in global economic growth and companies’ curbs on supply. China’s demand for commodities has also been firmer than expected as both infrastructure and property spending held up. But unlike the commodities super cycle in the 2000s, the upswing in metal prices has been less this time around even as idiosyncratic risks and policy changes, particularly in China, play a larger role.

For instance, copper prices have been supported by reduced supply amidst strikes at Grasberg, the world’s third-largest copper mine. Demand increased on the back of China’s push to increase the consumption of electric vehicles (each car uses more than 90 kilograms of copper). Aluminium prices have also remained firm following China’s Ministry of Environment Protection’s directive to producers in 28 cities to slash output during winter. Similarly, iron ore shot up 80% in 2016 in response to the government’s move to curb coal output, both of which are inputs to make steel.

These idiosyncratic factors will continue to play a large role in affecting the price of metals. In my recent analyst trip to China, I visited mining and construction companies in Beijing and Jinan. My sense was that iron ore faces the biggest downside risks in the second half of 2017. To understand why, some background knowledge about steelmaking is necessary. There are two main ways to make steel: one way is to use a blast furnace to combine iron ore with coke (fuel) and the second method is to melt scrap steel in an induction furnace.

Earlier this year, China’s central government stipulated that induction furnaces – which recycles scrap steel into steel – should be eliminated by June 2017. This means that scrap steel – as a raw material for induction furnaces – has nowhere to go. My conversations with Chinese steel producers indicated that they were prepared to absorb the increased supply, estimated at 60 million tonnes, as up to 20% of scrap steel can be combined with iron ore in blast furnaces without affecting the quality of steel output. In turn, this drives down the demand for iron ore.

Although iron ore prices have already somewhat corrected (-27% year to date) after overshooting in 2016, I think markets have yet to price in this additional risk. The cannibalisation of demand by scrap steel, coupled with already significant iron ore supply for 2017, should put a lid on iron ore prices this year. The good news is that scrap steel should be fully absorbed by the end of 2017. Barring any delay in the closure of induction furnaces, this should help iron ore prices recover in 2018. 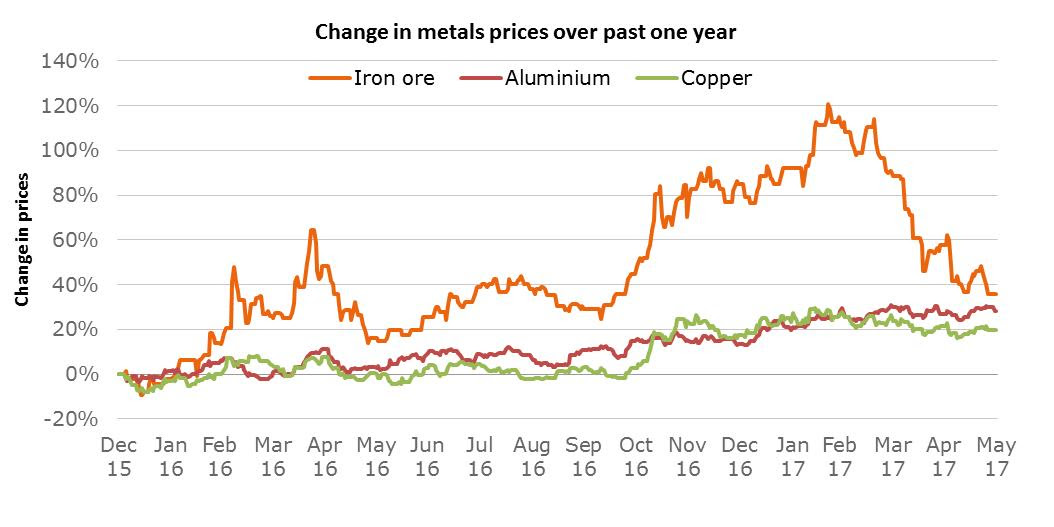 In contrast, I expect the positive trends for both copper and aluminium to persist. Both metals face less supply risks in the foreseeable future, which should provide a floor for prices. We have positioned our emerging market corporate bond portfolios accordingly by having an underweight to iron ore miners within the commodity sector. Nonetheless, we remain vigilant of policy changes in China that might cause us to change our investment case.