OPEC and its non-OPEC partners have agreed to freeze production at current levels for another nine months. Current production levels are approximately 1.8mn barrels per day lower than they were in October 2016, if the output figures are to be believed. The market has been led to believe that this would be the likely outcome from the meeting after the major players had already announced that a nine-month extension was palatable. With the market conditioned to expect surprises emerging from the “smoke and mirrors” format of OPEC meetings, the result of the current meeting has been an anti-climax.

The Saudi-Arabian led cartel has sought to bolster prices after the price collapse that emerged when its 2014 experiment failed and crippled many OPEC member economies. Saudi Arabia wants to sell part of its state oil company to boost its financial coffers, which is the chief reason why it wants oil prices to trade above US$50/bbl. Other members have followed and sacrificed production as higher prices have helped turn revenues around. However, revenues are unlikely to reach levels these countries are accustomed to. 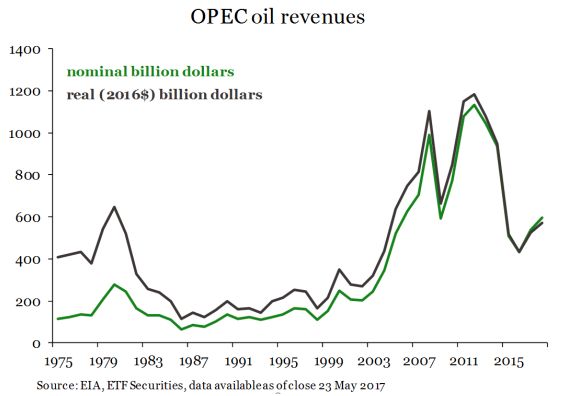 Oil continues to trade in a tight range with the upper bound at US$55/bbl. As we argued in