Julius Baer: The end of austerity, the beginning of Reaganomics 2.0

Brexit. Trump. Two landmark events in 2016 point to a change in economic policies going forward: away from monetary policy to concerted fiscal stimulus and infrastructure spending. The largest economy in the world, the US, is ploughing ahead and taking global rates and the world’s reserve currency along with it.

2016 proved to be a turning point in the global economic policy mix as protests against the current business regime reached new dimensions. After the Brexit vote in June and the US elections in November, the wake-up call for policymakers was not to go unheard: the times when central banks were the only game in town are over. Governments have to do whatever it takes to spur growth (see chart 1). 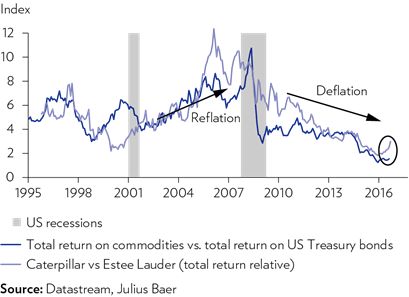 The UK government chose to take case-by-case decisions such as considering corporate tax cuts or approving infrastructure projects like a GBP 18 billion nuclear power plant or a third runway at Heathrow.

As for the US, the victory of the Republicans and their president-elect Donald Trump opens the opportunity to introduce the biggest policy change since the early 1980s – also called Reaganomics 2.0. While the original (see box below) was designed to curb government spending overall – which it actually did not –, the 2017 edition is likely to be a lot more about outright infrastructure spending besides tax cuts and reduction of regulation.

The most striking feature of these supply-side-driven policies is the underlying assumption of the Laffer curve (see chart 2).

Chart 2: The Laffer curve, how to increase tax revenues by lowering taxes

This concept, which lacks scientific proof, forecasts an increase of tax revenues after a cut in taxes – assuming the US economy is on the right half of the graph. At the same time, central banks are assumed to be accommodative to let economies gain the necessary traction. If successful, this policy mix should allow a pick-up in economic activity and a normalisation of inflation rates. This in turn should be reflected in normalising, i.e. rising yield levels and stronger stock markets, while the US dollar gets a boost as the US ventures out first in this policy mix and takes rates and the US dollar along with it.

Against this change in global economic backdrop, we make the following key calls for the year ahead: