AXA IM's Aidan Yao: What does the new US President mean for Asia?

“The American people have spoken and a new President was elected in the US. Despite early fears of a Trump victory, financial markets have reacted unexpectedly, with most developed markets finishing the day in positive territory – a result that many would have subscribed to a Clinton win. In Asia, equity markets rode on that positive momentum today, regaining all the lost ground from the initial knee-jerk reaction. Credit spreads also narrowed to levels prior to the election.

For some cautious investors, such a benign response from the market appears to be at odds with the significant uncertainties associated with Trump’s policies and their impact on the US and world economy. From a macro standpoint, Asia is clearly not immune to all of this, and we think the effect of “Trump uncertainties” could come through across four key areas: 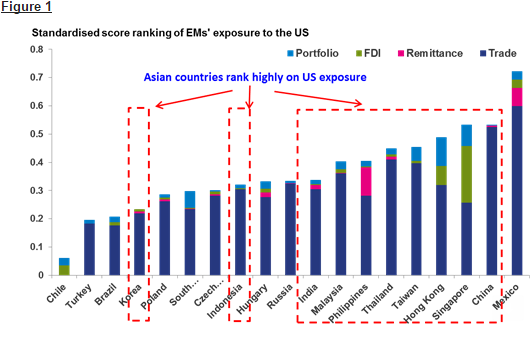 1. Trade and foreign exchange (FX) policies: Asia is collectively the most exposed region to the US via trade, investment and remittance (Fig 1). The region ran a USD 348 billion trade surplus vs. the US in 2015, accounting for 2% of Asia’s GDP. China contributed a lion’s share of this (Fig 2), with a bilateral trade surplus (vs. US) at almost 3% of GDP (Fig 3). Not surprising then, Trump has targeted China (and Mexico) with threats of punitive tariffs. There are uncertainties as to what extent Trump will act on his election promises, given that a full implementation of the protectionist policy could significantly backfire for the US, and potentially lead to a trade war with China (this will in turn affect Asia through the trade supply-chain.

For more details, see here). In addition, Trump has threatened to label China as a ‘currency manipulator’. Even though he will have a difficult time to prove his case – as China no longer runs a large CA surplus (>3%) and has stopped accumulating FX reserves, the mere threat of investigation (on China’s FX policy) could move the currency market. We see this category of policies as unequivocally negative for Asia, particularly China. 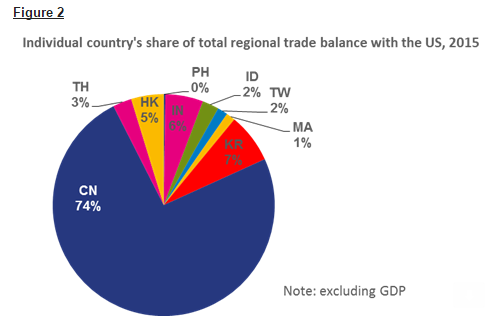 2. Fiscal stimulus and US growth: Among various economic policies proposed by Trump, the tax reduction plan is aligned with the House Republican proposal, and hence, is more likely to be implemented (see here). In addition, Trump has promised to significantly increase infrastructure spending, which will boost US growth in the coming years. With Republicans now controlling both the House and the Senate, passing fiscal stimulus is becoming easier than before. If the proposed policies can successfully revive US growth, this will bode well for Asia and the world at large.

3. Federal Reserve policy and the US dollar: Relating to the economic uncertainties, there is no clear cut on the Federal Reserve (Fed) policy and the US dollar under the Trump Presidency. Expansionist fiscal policy could drive stronger economic growth, resulting in a faster normalisation of monetary policy. But at the same time, some of Trump’s campaign rhetoric, if it turns into action, could damage the credibility of the Fed and the US government (e.g. on Yellen reappointment and widening fiscal deficit).

All of these factors tend to cloud the outlook for the Fed and the US dollar, and therefore create uncertainties for capital flows and monetary conditions in Asia. Our baseline case remains that the Fed will hike on December 14th, but this is subject to risks from the financial market. 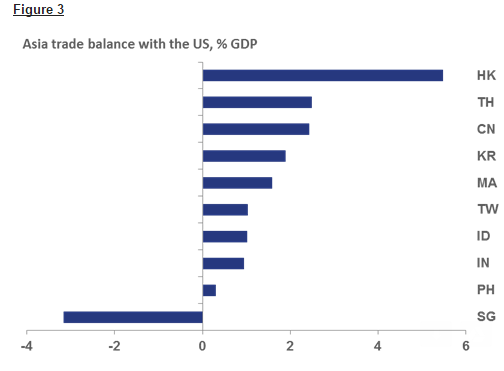 4. Market sentiment and international feedback: In the near-term, we expect financial markets to remain sensitive to US politics and any comments from Trump that may provide clues to his forthcoming policies. Asian markets will continue to take cues from the US and follow their market swings closely. In addition, there could be indirect feedback from Europe, if the European Central Bank alters its policy in light of the US election result (we still expect a 3 million extension to the quantitative easing program in December). The same goes for the Bank of Japan (in light of surging market volatility) and the People’s Bank of China (if a trade war breaks out).”