The US election and the prospects of a Trump presidency are currently looming large over markets. The Brexit vote highlighted how current conditions are polarising electorates, with more extreme parties and candidates garnering support. Polls are currently leaning against Trump, but we have seen polls be wrong before. 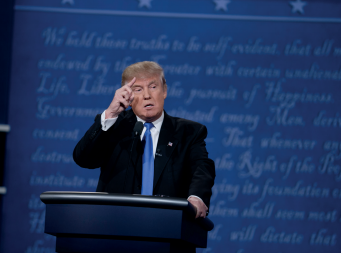 A Trump win would no doubt cause a sharp sell-off in markets – bear in mind more than half of daily trade stems from computers and ETFs – but the actual economic impact would evolve more slowly. The defining feature of US politics over the last decade has been the divided nature of Congress, which has hamstrung the flexibility of US policy. Whoever wins, this dynamic is likely to make the translation of campaign promises to policy tortuous.

US political uncertainty has overshadowed our positions in healthcare stocks over recent quarters. The candidates’ policies here are notably polarised – in short, Clinton wants to extend ‘Obamacare’, while Trump outlined plans to repeal it.

Government policy will remain a factor in healthcare, as it always has been, but we have not seen it become the ‘defining issue’ for either candidate. The ongoing polarisation of the parties will likely mean changes are evolutionary over time. The market has inevitably recoiled in the face of this added noise and led to a large proportion of this sector being traded as ‘event risk’ proxies on the election outcome. This is overshadowing the positive longer-term fundamentals of many companies and we see this as presenting opportunity. Over the medium term we see a number of key tailwinds, such as companies able to sustain above average growth due to the strengths of technology and scale advantages.

We also see a rise in demand due to demographics and rising living standards in emerging economies – as well as potential for scientific advances, most notably in biotechnology. We need to be selective to ensure we are backing truly advantaged companies, but at present these strengths are being discounted compared to other non-cyclical companies.