As widely expected, the Federal Reserve’s Federal Open Market Committee (FOMC) announced a quarter-point increase in the federal funds target rate on December 16, 2015—the first hike in nearly a decade and a break with a seven-year pattern of near zero short-term interest rates. In its post-meeting statement, the FOMC noted that it saw economic risks as balanced and removed reference to global economic and financial developments. The FOMC also highlighted the importance that policymakers will place on achieving higher inflation, and noted that further increases are likely to be gradual.

In concert with raising its federal funds target rate, the FOMC also announced that it was increasing the interest rate on excess reserves to 0.50%, to establish a ceiling on its target range, while raising the rate on overnight reverse repurchase agreements to 0.25%, which establishes a floor.

Rate guidance is no surprise—further hikes will be “gradual” (In my view, promising to be “cautious” would have provided investors better guidance): “The Committee expects that economic conditions will evolve in a manner that will warrant only gradual increases in the federal funds rate; the federal funds rate is likely to remain, for some time, below levels that are expected to prevail in the longer run. However, the actual path of the federal funds rate will depend on the economic outlook as informed by incoming data.” 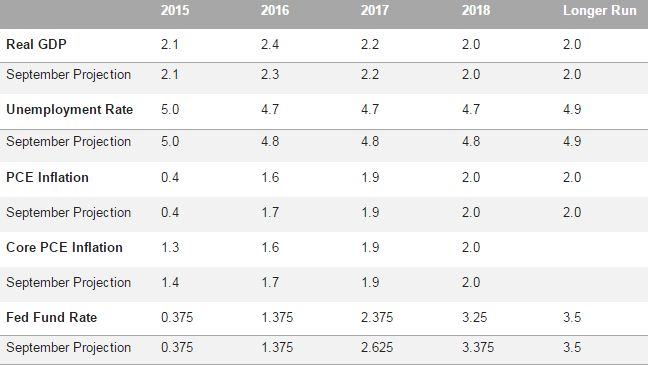 THREE THINGS TO NOTE BEYOND THE HEADLINES:

The Committee now sees “risks to the outlook for both economic activity and the labor market as balanced.” In its October 28 statement, the Committee saw risks as “nearly balanced” and noted that it was “monitoring global economic and financial developments.”

The Committee made explicit notice of the importance of actual progress toward 2% inflation—a nod to the contingent of policymakers who argued in recent months for deferring any action until inflation begins to rise. “In light of the current shortfall of inflation from 2%,” the statement noted, “the Committee will carefully monitor actual and expected progress toward its inflation goal.”

Policymakers also made a stronger statement about the Fed’s plans for portfolio reinvestment. The Committee anticipates reinvesting principal payments “until normalization of the level of the federal funds rate is well underway.” The September 2014 statement on “Policy Normalization Principles and Plans” was weaker: “The Committee expects to cease or commence phasing out reinvestments after it begins increasing the target range for the federal funds rate.”