Sell in May, still good idea?

For years it looked the financial anomaly ‘Sell in May’ was still resistant throughout the years. This phenomenon, also called the ‘Halloween Effect’ is about lower or negative returns in the stock markets from May till end of August. The saying is that investors should be back in September, meaning that from the period September till April on average the returns on the equity markets are higher.

In case financial markets were only slightly predictable then these kind of ‘mispricings’ or ‘anomalies’ would normally been arbitraged away directly. This means that markets are quite efficient so in practice the ‘Halloween-indicator’ could have never existed as markets would directly anticipate on it. But this appeared to wrong according to lots of research from Dutchmen Ben Jacobsen (Edinburgh Business School). Jacobsen investigated in his paper ‘The Halloween Indicator, Sell in May and Go Away: Another Puzzle’ (2001) 37 huge capital weighted re-investment indices from 19 countries (in local currencies).

The researched period by Jacobsen was from 1970 till 1998. Jacobsen discovered a strong ‘Halloween-Effect’ for 36 of the 37 indices. This means relatively higher returns in the winter and relatively lower in the summer.

Jacobsen tried to find explanations for this market anomaly but couldn’t find one for it. Possible reasons could be consumer spending, holidays, dividends, harvests etcetera but none of these could explain why the returns in the summers were on average higher. As Jacobsen’s research was till 1998 we thought we needed to do a small ‘light weight’ update of this anomaly.

Sell in May effect disappeared in many markets

For our research we used the most popular capital weighted indices like the S&P 500, the NASDAQ 100, the Bovespa and the largest ones in Europe like the FTSE100, the CAC40, the Xetra DAX and the AEX-index. For all the used indices we used the re-invested indices so that the received dividends are included.

Sell in May minus buy & hold

The upper graph shows the differences between the buy & hold returns from Jan. 1st till December 31 with the returns of the portfolios that bought the indices September the 1st and sold them at April 30th. We see a huge negative return for the main index of Greece. But we when look deeper in the returns we see that the huge negative returns for the Greece index are almost totally caused by the recent turmoil because of Greece’s debt problems which caused huge sellf offs in the last winters.

These are for instance Google, Apple, Intel and Microsoft. So the returns of both indices are a bit tilted to a capital weighting bias. Also for the Bovespa we see relatively more positive returns in the summer months.

The graph above shows the average monthly returns over the period January 1980 till April 2015. We see that for most of the months the returns are relatively high but the month August had on average negative returns. When we dig deeper in the August returns we see 2 huge catastrophic black swan events in the August months: August 2 the 1st Gulf War started and in August 2008 Lehman Brothers collapsed causing huge sell offs. But when we exclude both years we still see a slightly negative return for August. 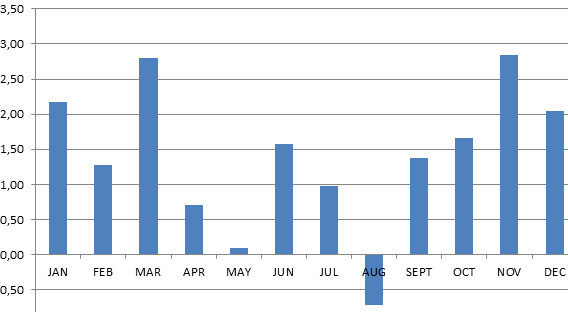 Summarizing our research we see that the winter months are on average better months for equity returns. Summer months had on average lower results but over the past 25 years 2 main black swan events caused the summers to have lower/negative results. But we won’t recommend investors setting up strategies based on these results. Results of the past are never warranties for the future but if you ask us when to buy equities we recommend to do it in the summer times and to sell them end of January.