Unprecedented stimulus in the Eurozone – sovereign QE, negative deposit rates, depreciating Euro and cheaper oil – is having a positive effect not just on asset prices but also on underlying economic growth. Economic lead indicators in Europe bottomed in October 2014 and have been recovering steadily since.

This is a welcome development for European equity investors: we should begin to see a return to meaningful corporate profit growth, not just amongst internationally diversified European companies benefitting from a cheaper Euro, but also amongst companies geared to the pick-up in the domestic European economy. As such, if Mario Draghi is Frankenstein and the Eurozone economy, Frankenstein’s monster, then Mario’s monster has come to life.

It is difficult to underemphasise the significance of ECB QE, which had previously been seen as a policy tool which the ECB could or would never implement but for which now there is essentially an open-ended commitment.

Asset purchases announced by the ECB amount to around 7.5% of Eurozone GDP. With an estimated Eurozone fiscal deficit of just 2.2% of GDP this year, the stock of Eurozone public debt available to investors will actual decline (for the first time since WW2).

As such, we are not only witnessing what can only be described in the context of financial history as insanely low yields on most sovereign bonds, but a likely crowding out of institutional investors from traditional fixed income markets, with liquidity inevitable ending up in other asset classes, including equity markets.

The logical conclusion of these policies is that the ECB will, if necessary, monetize the debt of all Eurozone sovereigns so long as their governments are not beyond the pale. Whereas there was previously a risk that all Eurozone governments had borrowed in a foreign currency which they ultimately could not print, the ECB has now established itself – like the Fed and the BoE – as a credible buyer (as well as lender) of last resort. As a result there should be a much diminished (but not fully extinguished given the absence of explicit fiscal and of genuine political union) credibility gap as to the long term viability of the Euro. The main cause of the Eurozone’s unique vulnerability to a sovereign debt crisis is now largely removed.

But should Eurozone governments be seen as abusing QE – as an alternative to fiscal prudence and economic reform – confidence in the Euro, as a store of value, would be greatly diminished and Europe’s economic future put in peril. As such QE makes moral hazard more likely if some countries do not want to abide by the rules.

This means it is more – not less likely – in my view, that Greece is now ejected from the Eurozone. The confrontational scenario between the Syrizia-led Greek government and its EU and IMF creditors is likely to come to a head over the summer when €6.5bn of government bonds are scheduled to be repaid. The Greek government does not currently have access to sufficient funds. It is unlikely that the EU and IMF will agree to afford Greece sufficient liquidity unless a credible programme of economic reform is established where there is some confidence that the reforms will be implemented. It also seems unlikely that the current Greek coalition would have sufficient political support to implement such a programme of economic reform.

Particularly in view of the firewalls now in place for Eurozone sovereign debt, I no longer believe it is clear that the Eurozone would not be better off, certainly in the longer term, by ejecting a recalcitrant Greece from Euro membership even if this leads to a short-term market negative event of Greek debt default. As we can see from the figure below, only €39bn (12%) of Greek government debt is held by private investors: the biggest amount of capital at risk (€217bn or 69% plus the €27bn or 9% held by the ECB) is largely ultimately owned by other Eurozone governments, which have record cheap access to capital, and should be put into context of the €60bn a month of new money being created by the ECB in asset purchases.

In fact the entire stock of Greek government debt (€322bn) amounts to just over five months of ECB QE. These asset purchases could also be accelerated in order to shield the rest of the Eurozone economy from the negative fall-out from a “Grexit”. Although I accept it is a non-consensus view, and would fully expect an initial significant negative market reaction, I think ECB QE is a “game-changer” in terms of managing the negative consequences of “Grexit”. 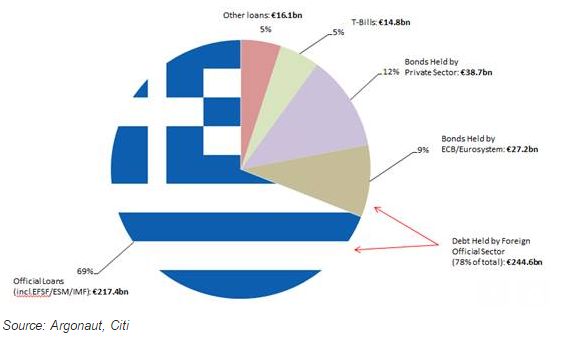