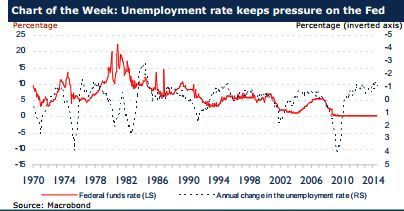 As long as consumer price inflation and earnings growth remains modest, the Fed can therefore refrain from tightening monetary policy and deny that it created inflation in financial markets. It is another reason to keep a close eye on consumer price and earnings growth data: once these inflation measures trend higher, the Fed will have no option than to let the markets know that monetary policy will be tightened sooner than expected.

Mainly as a consequence of geopolitical developments and softer data from the eurozone, financial market sentiment weakened further. It is interesting to note that weak data resulted in rising financial asset prices only a few months ago as it increased the probability that central banks would keep monetary policy accommodative for even longer or loosen their monetary policy stance again, but that was no longer the case last week. The past few months we discussed the decline in liquidity in financial markets a number of times, including in the US high yield market. Somewhat worrisome, US high yield funds suffered the fifth consecutive week of outflows and the third biggest weekly outflows as a percentage of assets under management since the series started in 2003. Weakness in high yield markets may be one of the first signals that risk appetite is turning the corner.

Meanwhile, last week’s ISM non-manufacturing index rose to 58.7 in July after 56.0 in June. The index was at the highest level since November 2005, suggesting that economic growth will be solid. These business surveys alone pose upside risks to our 2.8% annualised growth projection for Q3. Yet, there are several factors that could have a downward effect on economic growth, including geopolitical events, financial market developments, but potentially also slower real wage growth. Based on incoming macroeconomic data, however, there is no reason to expect the Fed to change its rate hike rhetoric.

The Italian economy fell back into a technical recession, despite that the country (the eurozone’s third biggest economy) was already the worst performer in the euro region after Greece. Since Q3 2011 the country has reported only one(!) quarter in which the economy expanded: +0.1% in Q4 2013. Hopefully the ECB’s latest measures will support economic activity somewhat the coming quarters, but it seems increasingly likely that the Italian economy will stagnate at best this year. The implication of the weak economic environment is that government debt continues to accumulate.,/p>

Some will counter argue that the European Commission expects Italy to run a primary budget (excluding interest payments) surplus of 2.6% of GDP this year. But even though this might be true, it will only help to stabilise the government debt/GDP ratio at best. In fact, if Italy’s economic growth rate doesn’t pick-up (which it will unlikely materially do in our view), the debt ratio will even rise further from 135% of GDP (the second highest ratio in the eurozone).

One of the problems with high government debt is that the money that is used for the fulfilment of public sector debt obligations isn’t used for productive (fixed capital) investments. The situation is from a business investment perspective somewhat similar to Japan from the mid-1990s-2011. This is bad news for productivity and therefore economic growth prospects. Furthermore, with the eurozone’s third biggest economy having contracted, overall eurozone growth will be affected as well. We already know that the Spanish economy (the eurozone’s fourth biggest) grew by 0.6% in Q2, while the biggest (Germany) and second biggest (France) economies are expected to report more or less stagnating economic activity. Accordingly, eurozone GDP growth may be close to 0% in Q2. What certainly doesn’t help is that signals from the region’s biggest economy are certainly not only positive anymore.

The trade war with Russia will unlikely have an enormous direct impact on the German economy, but it certainly doesn’t help the economy either. It is extremely difficult to judge the direct and indirect impact of the sanctions and counter-sanctions, for example via economic effects on Eastern and Central Europe. Meanwhile, the ECB decided to refrain from announcing new policy measures last week, but Draghi sounded a bit more cautious about the economic outlook. Yet, even If the eurozone faces negative effects from a geopolitical crisis, it remains to be seen what the response of the ECB will be as it could result in surging oil prices and lower GDP growth. Meaning that if the eurozone isn’t confronted with a crisis the coming months, QE will only come in March 2015 at the earliest in our view.

Last week’s BoE MPC meeting did not deliver any surprises, so far at least! A dissenter can’t be ruled out, as MPC members have different views on the degree of slack in the economy, but this will only be visible once the minutes are released on August 20. Despite signs that activity might have passed its peak and forward looking components (e.g. the new orders component) are less bullish, the new orders and investment components remain very high and continue to point at healthy GDP growth levels of about 0.7% (qoq).

Moreover, CPI inflation is close to target at 1.9% (yoy), PMI’s remain at high levels, and the labour market improves with the unemployment rate at 6.5% (well below the ‘old’ 7% threshold), but wage growth remains subdued at below 1.0%. One of the reasons for the non-wage-inflation recovery is disappointing productivity growth. Without a rise in productivity, the BoE will have to raise interest rates sooner rather than later. So far, we stick with our forecast that the BoE will not raise rates until Q2 2015, but acknowledge that risks have shifted to the side of an earlier hike.