A vicious circle looms for the South African economy and the South African Rand now the country entered a technical recession after the economy unexpectedly contracted by 0.7% annualized during the second quarter after a dismal 2.6% contraction in the first quarter. This woe comes on top of the concerns about land transfers without compensation, which already seem to be weighing on investments in agriculture and mining, as the certainty of property rights becomes less certain.

A recession and rising unemployment may drive an unhappy population further in the arms of political parties that promise more radical land reforms, like the Economic Freedom Fighters of Julius Malema. This would push the situation from bad to worse, as uncertainty about land reforms and property rights is one of the reasons why the South African economy has not been faring well lately. To further complicate matters, inflation has been on the rise recently as well, spiking to 5.1% in July and moving to the upper bound of the South Africa Reserve Bank’s 3-6% target. As the ZAR has already lost more than 35% since February, inflation is likley to increase even further this year due to increased import prices. This puts the South African Reserve Bank before a diabolical dilemma; increase the interest rates to maintain price stability - but potentially further slowdown the economy - or let inflation run wild.

All of this takes place against a backdrop of rising US rates which limits liquidity for EMs, a trade war that might hit SA extra hard as an exporter of industrial metals and fears of contagion from crises elsewhere in the EM FX sphere, most notably Turkey and Argentina. This economic growth miss therefore seems like again another apocalyptic horseman bringing extra anguish to the South African situation, making the South African Rand look increasingly vulnerable. 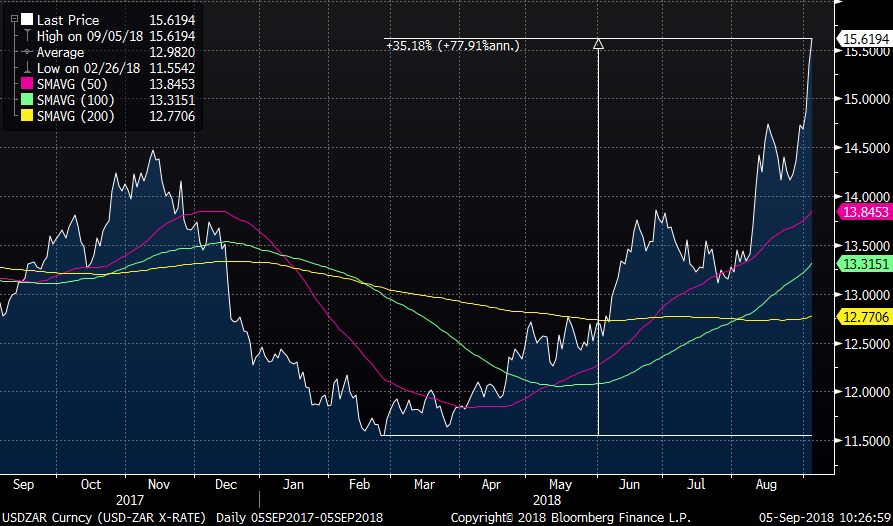