Turkish turbulence far from over

Turkish businesses urged for a tighter monetary policy today, which can be seen as the first ray of sunlight that makes it through a crack in the dark clouds hanging above the lira. It seems more likely however that it is one of those lonely swallows that don’t make a summer.

These large Turkish businesses are potentially an important actor within the Turkish political arena but it does beg the question; why didn’t they speak up before as they clearly have the knowledge to understand how the soaring inflation is hurting them, while their amount of “skin in the game” is undeniable? It demonstrates how far reaching the influence of the autocratic leader Erdogan is and today’s headline speaks more of desperation of business than of a fundamental change in this situation at this point. Taken together with anecdotal stories of Turkish businesses that suffer because they did not hedge their FX exposure and things may get ugly first before they get better.

With Turkish businesses in a tight spot, but politically seemingly powerless, and the Central Bank and Erdogan taking measures that range from ineffective to counterproductive, it seems like a solution for the currency crisis stemming from the domestic front is unlikely. Additionally, President Recep “no compromises” Erdogan is unlikely to allow help from institutions that even carry the slightest scent of Western influences like the International Monetary Fund, the European Central Bank or the Federal Reserve. This leaves Turkey in the arms of Russia, China, Qatar and others, but it remains to be seen whether these countries will be willing, or capable of supporting Turkey - especially with Turkey making all the wrong choices domestically at the moment.

The combination of all these factors makes it seem like the troubles for Turkey are far from over.

Chart 1: 6% daily swings have become a daily reality for the lira, indicating that few agents command the nerves to trade the currency. 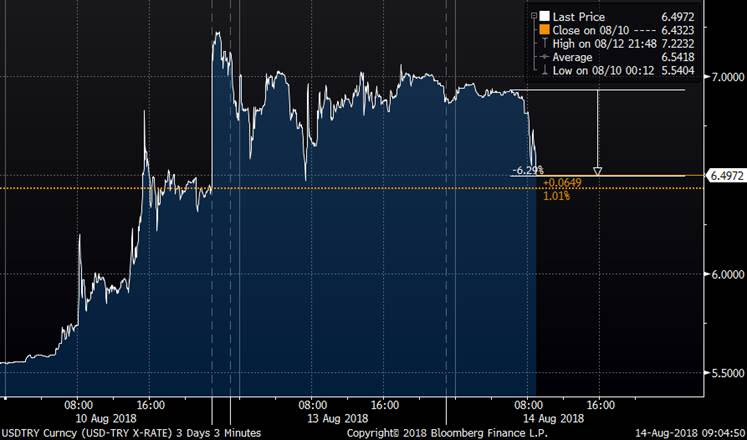