State Street Global Markets: The inflation gap is anything but average

“The interplay between traditional data outperformance and weakening alt-data makes determining where we are in the recovery a tricky proposition. We have been keenly focused on the shape of the real yield curve as an indicator of recovery expectations. In particular, a steepening of the 5s30s Tips curve is a bullish signal to us that reflects rising inflation over the next five-years, although the underperformance of long real yields may have multiple interpretations. For the moment, this continued steepening benefits cyclical over defensives, signaling continued hopes for a reflating economy.”

Michael Metcalfe, global head of Macro Strategy, discusses why the inflation gap is anything but “average”:
“US inflation averaged close to two percent in the last twenty years before the Fed adopted a formal inflation target. Since then a gap of more than six percent has opened up against the two percent trend. Averages are determined by how far back you chose to look, but even looking back just a few years, a gap in excess of two percent is clear. The implication is that inflation will be allowed to run significantly above two percent if it ever gets there and for quite some time. One could even argue that with the past undershoot, the Fed has just de facto abandoned its inflation target.” 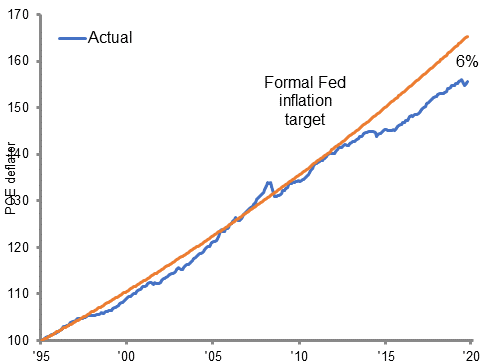