As the year draws to a close, the outlook for the near future has been decisively transformed as clarity has been brought to dismiss market overhang along 3 major fronts: market technicals, political and fundamental.

At this time, the three largest central banks in the world are expanding their balance sheets at the rate of $100 billion per month [Federal Reserve: $60bn/month, European Central Bank (ECB): $25bn/month and the Bank of Japan (BOJ): $15bn/month.] Excessive liquidity brought about by quantitative easing indirectly causes risk markets to trade up while policy action is in effect and most visibly in equity indexes like the S&P 500. At this time, it appears that the Fed, ECB and BOJ will continue at this pace through the first quarter of 2020.

In addition to the Fed. easing that was announced on Sep. 25, 2019, about $500 billion in year-end liquidity injections (in the form of expanded overnight and term repurchase agreements) are being deployed to ease borrowing pressures among banks typically witnessed lately around quarter-ends. This massive surge of liquidity will push the Fed's balance sheet to a new all time high, around year-end. Rapid liquidity injection by central banks induce risk-taking in financial markets indirectly by suppressing market volatility. The equity market volatility indicator VIX has tumbled to an extreme low in the 11’s.

This concurrent easing by central banks is a reversal of a phase of monetary tightening that commenced at the start of 2018 and drained about $2.9 trillion in excess reserves from the banking system. It should have theoretically left behind enough surplus reserves among US banks to freely lend to one another. However, the effects from the interaction of onerous banking regulations brought on by the 2008 financial crisis prompted surplus-rich banks to withhold overnight lending over periods of high-need seen at the end of quarters and caused overnight money-market rates to spike. Funding markets are the umbilical cord to business and economic activity and the friction witnessed going into year-end 2018 and again leading up to end-3Q 2019 prompted aggressive course correction by the Federal Reserve. 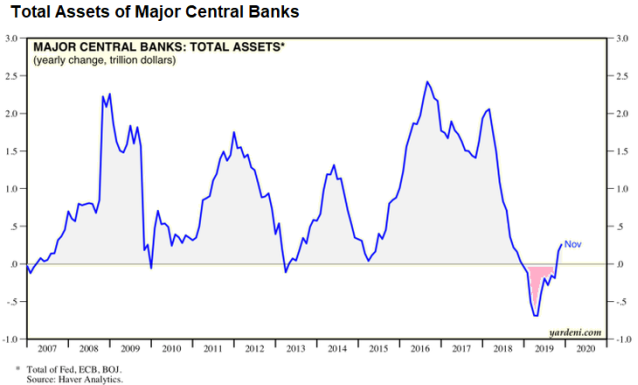 While it is always undesirable for the Fed to have to step in to relieve inter-bank lending troubles, we should note that its liquidity insertion this time has the goal of calibrating an appropriate level of cash reserves that banks need, as opposed to the 2008 financial crisis when the goal was to buy distressed and otherwise illiquid assets. Until a longer term solution is worked out, (likely in part, through Congressional legislation,) to alleviate frictions from banking regulation and induce inter-bank lending, larger system reserves will have to serve as the interim band-aid.

Political: Successful conclusion to Phase 1 of the US-China trade dispute and pro-Brexit Outcome in the UK

With the successful culmination of Phase 1 of a trade deal, the situation appears to have moved beyond “stalemate” status. Soon after Phase 1, Trump tweeted "We will begin negotiations on the Phase Two Deal immediately, rather than waiting until after the 2020 Election." Although the outlook on Phase 1 implementation is cautious at best, a year-and-a-half long overhang has been resolved.

Prior to President Trump, there was little display of political will to address or even identify the ever compounding trade imbalance problem. All along, the Congressional Budget Office continued to report budget deficits averaging almost a trillion dollars per year over the last decade. 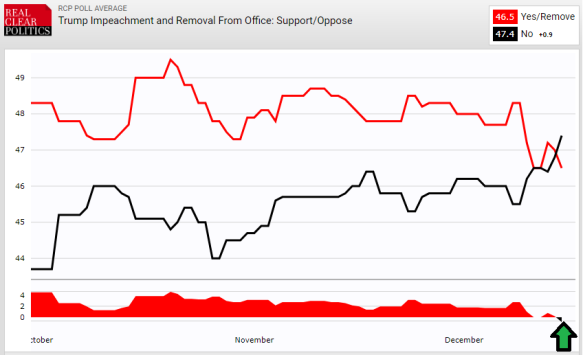 As the first results of President’s election promise of addressing trade imbalances with nations and restore economic strength, start to show results, support for it is starting to build. Although his job approval ratings are still low, more Americans now oppose impeachment, than support it as shown by the composite chart (of 12 separate polls) above by Real Clear Politics. The Democrats have expended a considerable amount of public goodwill in pursuit of impeachment at the cost of prioritizing more pressing issues of national interest. They have been aided by a mainstream media pushing the narrative that 'this matters', but the chart suggests the voting public has officially moved on.

There is a lesson to be learnt from the recent elections in the UK where the Conservative Party won by an absolute majority (more than 360 seats and 43.6% of the votes. In a huge boost towards securing protection of their own national interests, Johnson effectively ensured his Withdrawal Treaty will make it through their parliament and deliver some version of Brexit in the future.

This outcome offers the following takeaways to consider:

1) pursuit of a divisive agenda of little or no consequence to the lives of voting citizens and all for the sake of partisan victory is an exercise in futility. The overwhelming support of it in the mainstream media can temporarily faze the common citizen but they typically vote for the prospect of improving their lives and livelihood.

2) extremist socialism is not an alternative. While President trump has been unwavering with his agenda, the opposition and especially Sanders and Warren have outdone each other in promising ingratiating sops for the public.

3) sound economic policies are a prerequisite to any election platform. While the President’s agenda is almost exclusively focused on it, candidates in the opposition have not made a strong case of it.

Abuse of market driven globalization has brought on a course correction in significant economies adversely impacted by it. Resistance to it will continue to be a source of uncertainty for the foreseeable future leading to event driven periods of uncertainty and market volatility. It should be treated as a rite of passage to a more stable and secure outcome domestically and the markets will eventually reflect it.

The U.S. economy has been expanding uninterrupted for over 10 years now. With the cycle long in the tooth and the experience of the 2008 financial crisis still vivid in the minds of market participants, economic indicators have come under under intense scrutiny.

The economy almost reached stall speed at the start of 4Q 2019 with the ISM manufacturing going into its 4th straight month of contraction and the all-important Services index threatening to contract following a steady slowdown over the past 12 months. The rising risk was reflected in the underperformance of broad equity indexes. The recent update though, has brought about a consensus, the US economy has managed to bottom out at a level reflecting next to no growth for now. (A similar survey of the Services sector produced by IHS Markit edged up to 51.6% in November from 50.6%.)

There is a recognition, this is due in no small part because of the ongoing trade dispute with China and in the context of a widespread global slowdown. The former has disrupted supply chains and caused businesses to spend and invest more conservatively while farmers and manufacturers have been particularly hard hit. The ongoing dispute could give rise to market disruption in 2020 arising from several catalysts including: 1) disagreements in implementation of the Phase 1 deal, 2) US actions against Chinese technology companies, 3) tensions around the January election in Taiwan, 4) pro-Hong Kong actions by the US, 5) escalated confrontation in the South China Sea

Trade tensions will continue to foster unpredictability in economic policy making and cause a drag on demand and capital investment. Economic growth is therefore likely to slow on the margin in reflecting the sustained unpredictability going forward and is already manifesting in terms of a flat earnings trajectory.

The sustained economic uncertainty has not prevented market participants from shying away from risk; in 2019 (to date) every investment asset class (and all 11 S&P 500 sectors) have positive returns. Given this backdrop, near-term central bank monetary intervention may fuel market risk-taking to an extent but most markets and in particular, equities, are overextended and will be on a leash. Case in point, the aggregate US market closed at a $32 trillion market cap for the first time ever or approximately 149% market cap/GDP (see chart below.) This extreme was last seen at the turn of the millenium.

The proactive stance and preemptive moves by central banks through the facilitation of liquidity have played a significant role in keeping markets higher and maintaining a sanguine outlook. Monetary accommodation is expected to last at least until the end of March 2020.

Progress on the trade front has brought about a near-term stabilization in business sentiment to one of cautious anticipation, with scope for improvement. President Trump’s negotiations have come from an increasing position of strength, lending consolidation, clarity and potential for continuity to favored outcome. The global economy remains fraught with an increased number and frequency of risk ratcheting catalysts.

US GDP growth has averaged a modest 2.3% since the 2008 Financial Crisis and Congressional Budget Office projects that growth will fall to under 2% over the longer term. Yet, the US economy presents itself to investors globally as one least scathed from rising protectionist policy-making and with the brightest prospect for investment return for the foreseeable future. However, valuation metrics for the US market appear extended in a mature economic cycle and will likely reign in excessive risk-taking.