Investors’ risk appetites are returning after the shock of the UK’s Brexit vote in June, according to the findings of the latest Risk Rotation Index by NN Investment Partners1.

This represents a return to positive risk appetite after investors scaled back their risk exposure in the wake of the unexpected Brexit vote – the first time risk appetite had been negative in NN IP’s barometer since October 2014.

Willem Verhagen, Senior Economist at NN Investment Partners, says: “2016 has been something of a rollercoaster year for investors. Even those with healthy risk appetites have had their nerves pushed to the limit following two major political upsets globally. The striking thing is that you would have lost a lot of money if you had known the outcome of the Brexit vote, the US election and the Italian referendum, and had traded on the before-the-event consensus view of the market impact. This points to the importance of global growth momentum going into a political event. If it occurs against the background of accelerating growth and easy financial conditions supported by dovish central banks this can go a long way in helping to digest an unexpected political outcome."

"Having said that, this is no guarantee that this will always be the case for future events. The economy and financial markets behave like an evolutionary system which evolves in unpredictable ways and which can sometimes make a big jump towards a new (temporary) equilibrium. What’s more, the market could still form a different opinion about the events which have already occurred. For instance, markets are now betting big time on the Trump reflation trade and may be too complacent about other risk scenarios."

Investors view a Fed rate rise as the biggest threat to their investment portfolios, with 44% of respondents citing it as ‘significant’. This suggests that some investors do not differentiate between the various reasons for the Fed to hike. If the Fed hikes for a good reason (i.e. stronger growth) this is likely to be good for risk assets, especially in an environment where inflation remains well-behaved. The Fed can also hike for another reason, e.g. to stamp inflation out of the system, which is bad for risk assets.

This was closely followed by inflation (43%), while 38% believe the fallout from the Trump election will be a threat. Less than a third (29%) of respondents view Brexit as a threat, implying that the immediate danger to global investment portfolios caused by the “leave” vote has been addressed.

When asked about the US election, an overwhelming majority (84%) of respondents stated that they had expected a Clinton win. This misjudgement echoes NN IP’s study earlier this year when just over a quarter (27%) of respondents believed that a “leave” vote was the likely outcome.

Willem Verhagen continues: “The findings from this study show just how unpredictable 2016 has been for investors – but never has there been a better opportunity to exploit market volatility. With Donald Trump set to be sworn in to the White House on 20th January 2017, it will be very interesting to see how markets move between now and then. However, investors will certainly be hoping for slightly fewer shocks in 2017 than have been experienced this year.” 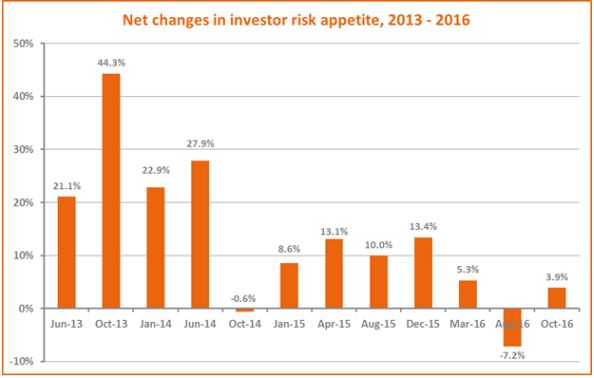 When asked about the most attractive geographical markets in terms of risk versus return over the coming six months, investors ranked Emerging Markets most highly, with 39% viewing it as the most attractive region – 10% higher than in the previous index. This was followed by the US (22%), Japan (19%) and the UK (10%).