China’s CSI 300 A-share index just hit a new post-2008 high, finally overtaking the peak of a dramatic boom/bust cycle in 2015. But the current rally in China’s main onshore index still lags its US and global counterparts on both an absolute and valuation basis, suggesting there could be more catching-up to do. 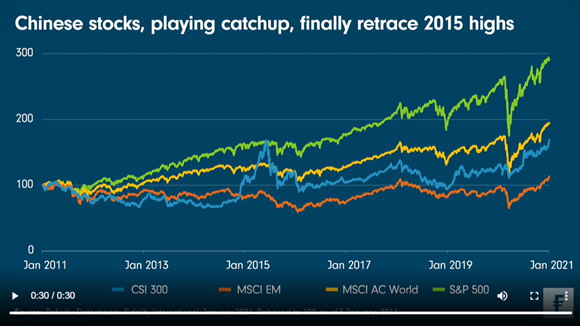 As we enter 2021 and approach the lunar year of the Ox, China’s onshore equities have been on a bull run and the CSI-300 index recently surpassed its 2015 highs. What’s driving the rally? In fundamental terms, China has been leading the global economic rebound from Covid-19 and this is playing out in the macroeconomic and earnings data. At the same time, despite recent tensions with the US, the opening up of China’s capital markets remains a long-term supporting theme. But this is still in its early days - foreign investors hold less than 5 per cent of A-shares.

In terms of valuations, China’s stocks are to an extent still playing catchup with those in the US and other major markets. Even after the recent rally, the CSI 300’s 12-month forward price-to-earnings ratio stands at 19 times vs. 23 times for the S&P 500.

Some of the usual risks for this market also appear to be subdued, for now. The recent weakness of the US dollar and corresponding renminbi strength has tempered concerns around lack of dollar financing and dwindling FX reserves. Meanwhile, China’s level of borrowing is conservative compared with the many countries expected to see their fiscal deficits balloon in the wake of the past year’s global pandemic.

All these factors argue for a constructive view on China equities, with a slight preference for onshore markets despite their recent rally. Given the macro backdrop, we think value stocks may have scope to outperform in a reflationary environment, after years of trailing growth stocks in China as in elsewhere. China’s onshore shares may have further yet to run.