BlackRock: Fed should have lowered with 50 instead of 25 bp

Today’s Federal Reserve policy action was very well telegraphed and was delivered largely as expected, at least according to the tight range of forecasts by economists, as well as market pricing. Cutting the Fed Funds policy rate by 25 basis points continued the effort toward maintaining the economic expansion, which has recently been described by senior Fed officials as one of the central bank’s main goals. Of course, the question remains as to whether the economic expansion required any rate movement to promote the continued expansion, and at some level we would argue that it may not need it, but global environmental conditions do require it. In fact, we think that the Fed could have afforded to cut 50 bps at this meeting, and they could have made a bold statement that this action brought rates close to perceived levels of equilibrium consistent with what the Chairman recently described as a “mid-cycle adjustment.”

As is often suggested, fortune favors the bold, and while the Fed has a significant toolkit at its disposal, interest rates are not historically far from the zero bound. As a result, each rate move from here on should be designed to deliver a powerful statement, which can be much more effective than pursuing incrementalism and compromise amongst the various members of the FOMC. Interestingly, there were three dissents from the policy statement on the Committee, one in favor of greater accommodation, and two wishing for less.

​Abolder policy statement might have involved cutting policy rates by 50 bps, but then suggesting that was all that was required at this point to make the mid-cycle adjustment and attempt to support the slowing manufacturing sector and jobs market (see graph). In our view, this could have been more impactful, particularly when paired with a statement that if there was any tangible slowing that the Committee would aggressively cut rates again. That would have created more confidence at companies, with investors and with consumers, in our estimation. 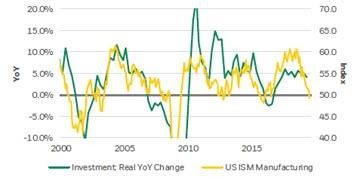 We have long argued that there is an asymmetric dynamic in place today for the Fed, with an economy that has spent a decade below the inflation target, and we think that we could afford to spend some time above it now (particularly with a growing national and global debt burden) and the multitude of tools that the Fed has to break growing inflation (such as IOER, rate increases, asset sales, moral suasion, etc.), should it rise too rapidly. By contrast, the policy tools available now to break potential deflation imported from a slowing global economy, and with other concerning disinflationary trends, appears much more limited.

Yet, if the Fed decided to leave rates and accommodation unaddressed, we would have witnessed a major rally in the dollar that would significantly impair an already moribund manufacturing/industrial sector, particularly with the set of trade dynamics we’re witnessing globally today. Additionally, USD strength would severely punish an economy that is historically sensitive to financial markets and a stronger dollar’s impact on markets that already lack confidence (witness the fact that liquidity resides near its lows across debt and equity markets).

In fact, this week’s dramatic moves in the short-term funding markets serve as a case in point for the need to carefully consider liquidity in the financial system. The week began with sizable fluctuations in the short-term funding markets, as corporate tax day, $19 billion in U.S. Treasury net supply settlement, and a holiday in Japan combined to roil funding operations. Indeed, while general collateral levels opened around 2.50% on Monday morning, by mid-day they had touched 4.50% before calming a bit. However, Tuesday morning could only be described as carnage in the repo markets, with general collateral jumping up to 8% and liquidity evaporating to zero. Essentially, the elasticity of the funding markets to absorb any large changes to supply, or money flows, continued to deteriorate, which forced the Fed to step in to conduct temporary open market repo operations with Primary Dealers. That represents an end to the Fed’s reserve-draining regime and the central bank is back to expanding reserves (see graph). Markets responded quickly, with repo rates stabilizing and trading lower, but this morning still witnessed some stresses in the short-term markets. 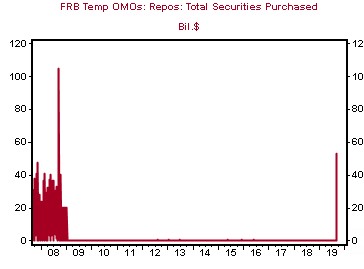 Overall, all of this funding market gyration points to the increasingly obvious fact that the end of Fed reserve draining is insufficient to stabilize these markets, and with the front-end of the curve inverted, and massive bill supply looming, there’s simply not enough liquidity in the system. Thus, while we think the Fed could have gone 50 bps at this meeting; in a bolder and more preemptive move, set in the context of a moderately weakening U.S. economy, a more concerning global economy; 25 bps was what was expected and delivered. Ultimately, we think the answer to current economic and market stresses will be for the Fed to cut policy rates to the point where inversion is alleviated and to permanently inject new/more liquidity into the financial system.

Separately, we also saw some moderate tweaking of the statement language reflecting the still buoyant level of household spending and very slowly improving inflationary conditions. We think that the Fed can now move another time this year to complete its “mid-cycle adjustment.” Further, we are keeping a keen eye on trade discussions, on recently concerning oil dynamics, on market liquidity, on Brexit, on the pace of slowing employment conditions, and as always on the inflation readings from here to determine if the Fed will have to cut rates again in October, or whether it will wait until December, or potentially at both meetings.